If you had a dime for every time a football maniac in the United Kingdom brought up a discussion on fantasy football, you would probably be a billionaire by now. Fantasy football has a special place in the hearts and souls of the football fanatics in Britain.

Watching the game from the stands or playing it out in the pitch near the park is not enough for the Britons. They want the most that they can get out of the game.

Thus, fantasy football was born. Since its booming inception, it has been a huge hit in every region of the United Kingdom, even in places where sports such as cricket and rugby are more played and loved.

The Many Ways in Which You Can Play Fantasy Football

There are different ways in which you can play fantasy football in United Kingdom. That is the beauty of this brand of British entertainment. You will never run out of options. 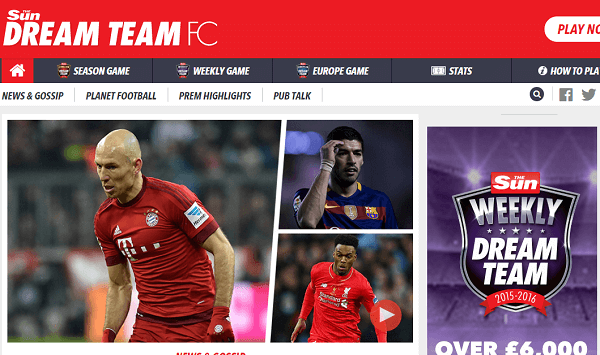 In other words, you do not have to be stuck with one annoying website if it fails to satisfy your demands. There is a huge market for fantasy football in United Kingdom undoubtedly, and this market is projected to only grow bigger as time moves on.

If you have not signed up for fantasy football, then you should by all means join in on the action and the excitement of this popular British pass time. If you are looking for a good place to start your fantasy football “career”, then you might consider giving Sun Dream Team a try.

As the name suggests, this is the football fantasy section of one of the largest news providers in the United Kingdom, The Daily Sun. In recent times, The Sun has had its reputation dented on more than one occasion for a myriad of reasons that are best left unsaid.

However, it does not change the fact that this news paper provides extensive coverage of the beautiful game and keeps all the fans updated on every important event in the world of football, especially in the world of British football.

What is Special about the Sun Dream Team?

It is also worth noting that the football fantasy section of The Sun, known as the Sun Dream Team is incredibly popular. There are thousands of people who log into dreamteamfc.com every single day just to get a bite of the sweet football fantasy cherry.

You have the amazing opportunity of being one of those people and stamping your ticket to football fantasy haven. Besides enjoying the thrill, the exhilaration and the ecstasy of engaging in fantasy football, you also give yourself a decent chance to win some massive cash prizes that could change your life forever.

You need to do your homework and have the competency to strategically construct a winning team that will fetch you more points than your competitor. You require in depth knowledge of the game of football in addition to great insight into players and their abilities.

Reading the game and the players is of utmost importance when it comes to being successful in Sun Dream Team.

Top 3 Tips to Help You Out

As a beginner, it might be difficult for you to garner success on your own. For that reason, we are here to help you out by providing you with some of the best tips about Sun Dream Team that you will ever hear.

If you implement our advice correctly, you will be well on your way to getting your hands on some serious cash in the not so distant future. Here are five tips that will help you out immensely when you are forming your Sun Dream Team:

1) Do Not Just Rely on a Star Studded Attack

A star studded attack in fantasy football can often disappoint. There is a very good reason for that. It is quite rare for all the stars in your midfield or your striking positions to click at the same time during the course of a single season.

For example, it is very rare to have Mesut Ozil, Yaya  Toure, Eden Hazard and Memphis Depay perform extraordinarily in the same week.

One of the biggest mistakes that the players of Sun Dream Team make is that they sacrifice quality in the defensive compartment in order to afford star power in attack. This is a huge error and one that will prove unbelievably costly down the road.

2) Do Not Ignore the Goalkeeper

Goalkeepers are hardly ever seen in the same light as midfielders and strikers (unless it is Manuel Neur that we are talking about). The lack of attention paid towards goalkeepers makes little sense as these players can make or break a team’s campaign come the end of the season.

For example, how many defeats have Man United been able to avoid in the recent past courtesy of the heroics of David De Gea? 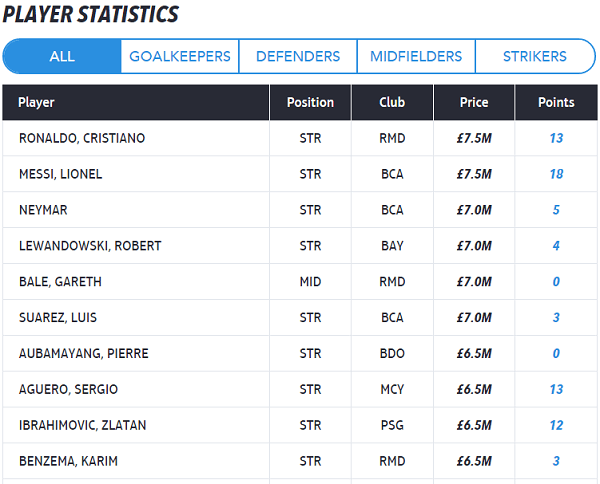 How many crucial saves from Joe Hart has allowed Manchester City’s defence to remain rock solid during desperate times in difficult matches? Every clean sheet and every save made by your keeper in the Sun Dream Team counts. Hence, focus on acquiring a brilliant goalkeeper with an affordable value.

3) Keep Young Players Who Have Had Impressive Starts

Young players who have had a brilliant start to the season are likely to keep their form up till the end of the campaign. This is a trend that has been observed for quite a while now.

This season, we have the likes of Romelu Lukaku, Jamie Vardy, Mahrez and Ross Barkley who have simply been sensational in the early going.

Since these players are relatively underrated and do not have pressure of performing on a regular basis, they tend to string together a series of outstanding performances without falling into the limelight of the media.

If your Sun Dream Team has two or three of the aforementioned players, then you are in for a great season ahead.