Just like I have said, there a various ways through which you can play the FA Premier Fantasy Football and the thoughts I have noted down in this article are just my style of playing.

It is crucial that you note that my overall rank is my primary focus instead of winning the mini leagues that you are assigned to. I should also give you a heads up that my premier fantasy style of play is very conservative and is very risk averse.

I mean is you are planning on basing your team on ownership, say for example 7/11 of your team is based on ownership instead of form, stats, and fixtures, then this does not take into account the mystery and need for research and advice.

As possibly, up to 50% of the teams formed in the Premier Fantasy Football will become inactive overtime as a result of the manager losing interest in the ownership figures.

Therefore, ownership, just like in real life football the managers talk about how important it is to attack with the all and defend when you don’t have the ball, can make a similar comparison with the Premier Fantasy Football.

Premier fantasy in my opinion is similar to ensuring you minimize dropping in ranks which you can achieve through being aware of the player ownership in addition to having a well formulated strategy to boost your rank.

I will use an example of ignoring the high profile player who keep scoring while everyone around you has them. The moment they keep on scoring, you can be rest assured that your rank will be nailed properly.

The most common played formation has been the 3-4-4 and definitely of the top 10 premier fantasy managers that I follow often, 8/10 would use this formation every week.

Starting from the back, you could have two goal keepers who you will keep rotating home and away. In most cases, people would spend £4.5M on each of the two keepers. This is a total waste of money as I would prefer to choose a £4.5M goal keeper and a £4.0M goalkeeper backup from the same team.

In my opinion, I would rather choose the second option as I would like to have as little money as possible lying on my bench. The only problem with the £4.0 defenders is that they are very difficult to come by and usually risk having very little game time.

How I choose my defenders will depend on the availability of the players as well as the pre-season line-ups. Additionally, I also use the FA premier fantasy gifts that are available such as Arsenal’s Hector Bellerin who was given to us as a £4.5 gift at the beginning of the season. 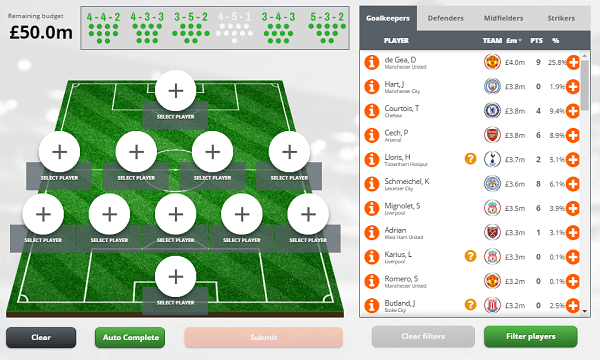 In midfield, you have a choice of choosing four starters and one cheap player to warm the bench (aiming for at most £4.5) or you can choose to have three starters and then rotating the fourth and fifth midfield player (aiming for their cost to be around £5.0).

In my opinion, I would go with the second option, which will prove to be viable especially if you have uptight funds.

At the striking role, I usually don’t have any hard and fast rules when picking the three best forwards. Last season, Vardy and Kane showed the value of having a cheap striker who can score goals.

Returns for a cheap striker will be excellent and will allow you to invest the extra money somewhere else in the team without compromising the striker returns significantly.

Choice of the Captain

In the Premier Fantasy Football, this is the most interesting part. First, it is important to note that you should use the captain choice like a shield instead of a sword. This means that you shouldn’t lose your ranking over the choice of captain you make.

When you scout at the various Premier Fantasy Football advice websites, the different captain polls will be a good indicator of the opinions of the active and leading managers will do when selecting their captains.

The main FA Premier Fantasy Football website will have a very close co-relation to how the top 10K captain choices will look like. if from the list there is a clear favorite, then I will always choose that regardless of whether or not I believe in the player.

Like I mentioned earlier that I am a conservative premier fantasy player, the one section that I have strong belief in capitalizing is the double game weeks. During this time, I usually go all out. This is more so when I have a player who has friendly upcoming fixtures right after the double game weeks.

This is because the transfer in most cases usually gives me some assurance that the transfer has some possibility of returning some points. In my opinion, I usually think that the returns are quiet unpredictable but I also find it worth trying something that will drastically boost my overall ranking.