The Daily Mail Fantasy Football League is the very first fantasy football league to bring you the action on all the European competitions.

From the Capital One, FA Cup, Premier League, Europa League and the Champions League you will have to play and buy up to some of the prolific European players throughout the season through the Euro Scout Codes.

The Daily Mail Fantasy Football League is a subsidiary of the mail newspaper, which expanded their remit for the various seasons by offering all its subscribers a chance to play for free and real money. In these two gaming modes, there is a difference.

In the real money game, you will have to make some payment to be able to pick a 16-man squad for a whooping budget of £135. From the picked or chosen squad, you are only allowed to make a total transfer of 25 players with the transfer limited to five players every month.

However, on the free gaming mode, you will have an opportunity to select an 11-man squad using the available budget of £55. You will also have to ensure that the initial lineup that you decide to choose conforms to the 5-3-2 formation or the 4-4-2 formation. 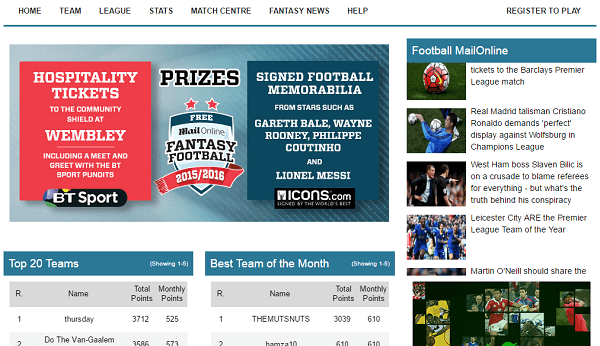 Once the season has began, you will have an opportunity of making up to 45 transfers. These transfers are equally distributed over 3 phases during the season where you are limited to only 15 transfers on each phase but not more than 3 transfers every week.

The scoring system on every game is based on the main fantasy football league, which is plain and straightforward. Goalkeepers are awarded with 3 points for keeping a clean sheet, 3 points for making a penalty save and a point for every 3 saves he makes. If he happens to score a goal, the keeper is awarded with 7 points.

All the captains usually have their overall score multiplied by two. It is therefore important to choose wisely your captain, as he will greatly determine where you’ll lie in the Daily Mail Fantasy Football League.

Getting Started With the Daily Mail Fantasy Football 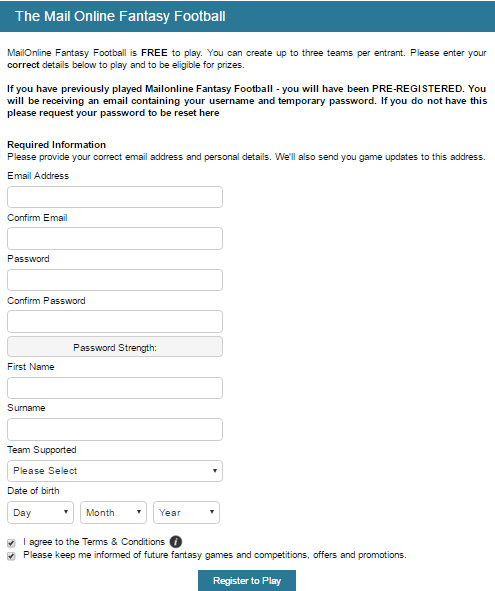 Alternatively, you can decide to create your own league and invite friends to join it. You have an opportunity of joining up to 10 leagues and creating up to 3 mini-leagues.

At the Daily Mail Fantasy Football league, you have an opportunity of building your team based on real life players who play in the Champions League, Europa League, Premier League, FA cup or the Capital One cup. 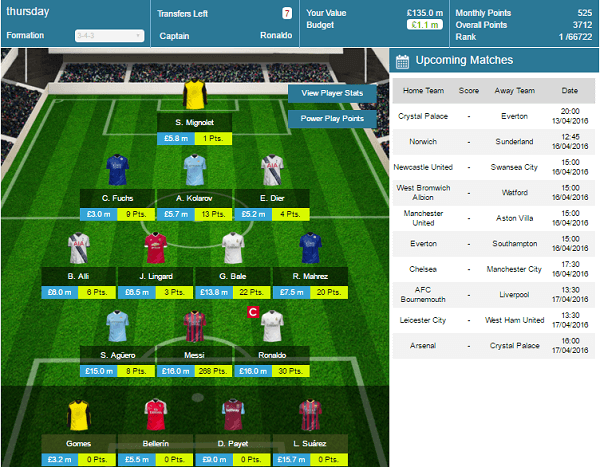 Either to do this, you can choose the automatic option where the computer randomly picks the team for you or you can manually select players based on your budget.

From the budget given, you are supposed to pick 11 players who will regularly start and 4 substitutes who will automatically replace any injured player.

Once you have the team chosen, you are required to select your captain from the chosen 11 players on the pitch. The captain always scores double points for every game he plays. If therefore he gets 10 points, he shall have cumulative points of 20 points at the end.

Note: According to the deadline set, you shall have to choose your players afresh each time lest you end up retaining the same team that played during the last game week. Once the deadline expires, any subsequent change will not be accounted for.

If you have a transfer every week, you have to ensure that you stick to the number. Exceeding the transfer number will result into deduction of points on your overall score that week.

For example, if you only have a transfer to make and proceed to make three transfers, only one of the three will be valid. The rest will only see some of your points being deducted from your overall score during the game week.

Substitutions are made or carried out automatically when you have an injured player or a player who hasn’t played. The substitution is usually carried out on how they are arranged in the bench. If a player plays even for a minute, he shall be considered to have played and will only be awarded with a point.

Players usually receive bonuses on a regular basis. Depending on how well the player has performed, he is going to be given or awarded a point or points.

At the end of the season, there are usually prices up for grabs for the leading players. Therefore, it is important that you play smart, and make wise decisions to boost your chances of winning!