Though there are many, who believe that there is big money to be made as far as Fantasy Premier League is concerned, when the push comes to the shove there are only very few players who can make it.

Hence, it would not be a bad idea to find out more about the various ways and means by which one can make big money through these Fantasy Premier League team betting and biddings.

One of the main attributes which contribute to making big money is with regard to the fluctuating player values. There is no doubt that players’ values keep moving up and down all the while.

The onus lies on the skilled manager to play with the market and try to get an advantage over the rivals.

But how does one go about getting to understand more about the Fantasy Premier League price changes? Let us try and find answers for the same over the next few lines.

It would be pertinent to mention that there have long been many formulas and theories as far as the fantasy football matches, teams and individuals are concerned.

There are many such fantasy websites which have seen the growth of various tools which enable reasonably accurate prediction of FPL players value changes as far as the entire season are concerned.

Following this will most certainly help to monitor Fantasy Premier League price rise and fall quite easily, accurately and on a real-time basis.

This certainly is very important because it will help all the stakeholders and managers when it comes to buying, selling and transferring players from one team to another.

What Is This Tool All About?

The tool perhaps was born from a simple formula which is available within the various FISO forums. It is quite a complex and advanced formula and is not for those who are risk averse or those who have faint hearts. 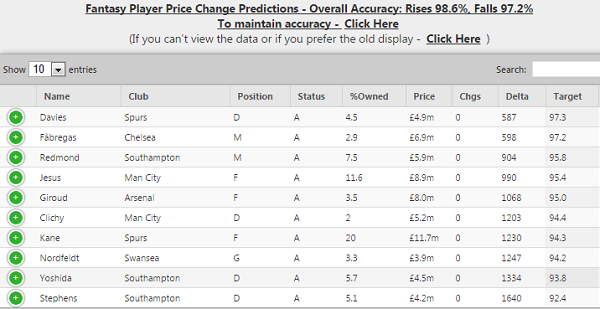 Nonetheless, it has stood the test of time, and, therefore, it would be interesting to have a look at the formula which has helped many managers to create teams with a huge value running into hundreds of millions pound sterling.

Following them would certainly be helpful in more ways than one. It certainly will help to have a reasonably accurate tab as far as following up and monitoring Fantasy Premier League prices are concerned.

How Could This Formula Helpful?

Those who have used this tool have reasons to believe, that it can be a very useful tool for any FPL manager who wants to make big money. However, points are extremely important as far as the league table is concerned.

You could try and follow an unconventional point game and still find ways and means to maximize profits. But this will help you to make an impressive squad but will not help you to win big money.

The prices of the players and teams go down and up depending on a number of factors. They include the form, suspensions, injuries, fixtures and so on.

The simple logic is to find out ways by which you can buy cheap and sell at a higher price. However, while this might look simple, you have to bear in mind that the game takes away a major chunk of your profit and, therefore, you need to exercise care and caution.

It is important for the beginners to have some basic understanding about Fantasy Premier League price list and other such important matters.

How to Make Profit on Players?

After a few weeks if he is found to be performing well then there are chances that his value might increase to 9.6. Hence, you could end up making a profit of 0.6. 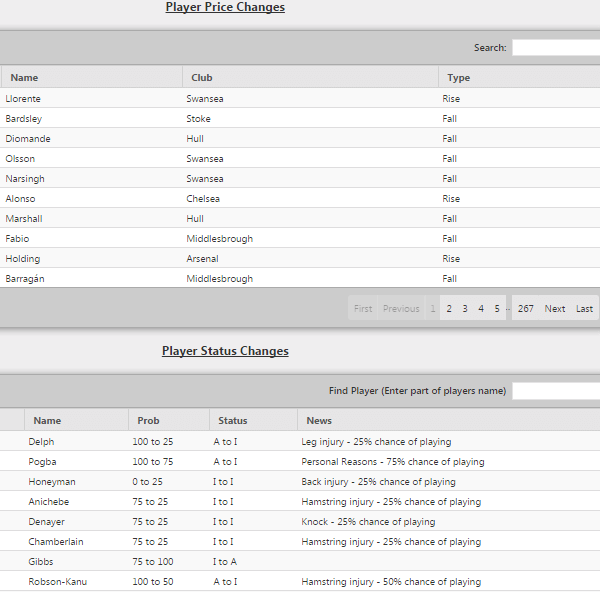 In case you decide to sell the player, you will have to part with half of this profit, and you make only 0.3 as the real profit.

However, if the players form to take a dip and you hold on to him your profits will certainly take a beating as and when you decide to sell him.

There is something known as rounding off to the nearest decimal which might or might not work to your advantage.

You also should have a reasonably good idea regarding the timing of the transfer. At the end of the day, there is no doubt that profit should be one of the main points to be kept in mind when you decide to go in for transfers and sales.

You must always look to buy, or transfer players inside your team provided you are sure that you get a total net margin of 0.2.

In the same light, you should only transfer players who have already started to make a profit or at least are on an even number.

Is It Possible to Predict Change of Values?

The value of players keeps changing depending on their popularity. It there is a demand for transferring Fantasy Premier League players into various teams then it is quite likely that his price will certainly go up.

The difference between the transfers out and transfers in is what profits all about. Hence, this point should always be kept in mind when it comes to accurately predicting the change of values of players.

When Do Prices Keep Changing?

Prices usually change once a day. It usually happens during the early part of the day which could be as early as 4 AM. However, in many cases, the timings have been changed to 12 midnight GMT.

While this is the general practice, there could be some changes to it depending on various parameters. The onus lies on the managers and other stakeholders to keep a tab on them on a regular basis.